Check back here regularly to find out what I am up to!

Museum saint Raymond, turns out the crypts of Saint Sernin were under it. One of the many Notre Dames, and the medical instrument museum (not many photographs, was unclear whether I could take any, got some of the apothecary) some good sun set pictures, but none of the bridge lite up, jerk bridge was taking too long. Had an awesome dinner with great dessert and a hilarious waitress.

Found a monument to the resistance, George Labit museum (he only lived to be 37 and he traveled and brought back pieces from everywhere!) Actually entered Saint Etienne, then off to Carcassonne and dinner at Little Versailles, same architect. 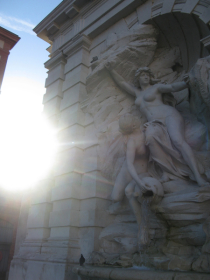 Went to the gigantic gardens, turns out there are chickens.... and roosters. In the Museum of Natural History I kept sayng "oh, I have that in my house, we have those, perhaps I should start a museum" I think after the private museums tomorrow I will think this even more.

Went on a bus tour today. The Cathedral is more than one church put together built at different times. There are roman walls, different views of things I have already seen and then I got to go in the capital building. Very very cool. I plan to head to the gardens and two museums tomorrow! Check back for more! 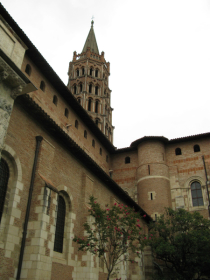 So this was a cool sight, used still as a church also has crypts in the basement? and various relics. We also went to Musee Des Augustins, which was a monastary. It had many old paintings and very cool architecture. The romanesque coloumns had lights over them that were different depending on the area they came from so presumably they could be identified by the viewer by area.

On our from Pont Neuf (new bridge, which is not so new) we saw this building with a dome on it, decided to search for the enterance turns out its the "Hopital de la Grave" which is a medevil hospital for the poor, victims of the plague were taken care of there. And the kicker the hospital is sitll in use!!!

Just like in Boston walk in the street until a car comes, then move.

What the 2 parts of the street in our square are for- still studying. One hypotosis is a section for bikes or scooters and a section for cars... the bikes and cars have proven this wrong a few times.

Children with plugs (pacifiers) much older than ones in America 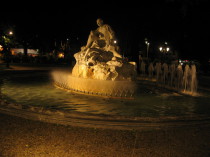 Day 1 in my Travels: I am Le' tired. I did not get to my hotel until later, took a much needed shower then nap. I had pizza for dinner (not very excited right? I was able to order it in French!) Then I had the most delicious dessert, a sampler of mousse, tirimisu (I normally don't love tirimisu but this was real tirimisu I suppose) and ice cream. Also I got the purple room in the hotel!

It began to rain so I was unable to hang out and take more pictures, so tomorrow there will be more! 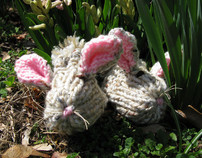